Jean Muir has been called “the greatest dressmaker in the world”, fit to be compared with Vionnet, Chanel and Madame Grès. A 1975 survey found that the two most copied designers in the world were Yves Saint Laurent and the entirely self-taught Jean Muir. According to fashion historian Sinty Stemp, Muir saw herself as standing outside of fashion, independent from it. Yet perhaps for that very reason, she remained at the absolute cutting edge of fashion for over thirty years — a feat no other 1960s British designer was able to do. Despite her brilliant career and international fame, she saw herself as simply a “dressmaker” and termed her approach to design “engineering in cloth”.

Muir was born in 1928. Her Scottish father Cyril was a draper’s floor superintendent – a job title that conjures up a world when a lot more people knew and cared deeply about fabric, and her father was one of them. Though her parents separated when she was young, her father clearly passed down to Muir his passion for high quality cloth. By the age of six, she was able to knit, embroider and sew.

After leaving school, Muir tried work in an electoral registration office and then a solicitor’s office, but her boon came when Liberty offered her a stockroom job in 1950. She was 22. Soon she moved to counter sales, but then, quite wonderfully, Liberty gave her the chance to sketch clothes in the ready-to-wear department, even though she had no formal artistic training. The sketches she made would be sent to customers to encourage them to order made-to-measure clothes. While at Liberty, she took evening classes at Central St. Martin’s in fashion illustration. A true descendant of the arts and crafts movement, Muir said of Liberty, “I love the materials and I love the historical associations. . . It was just my place.”

From this chance to sketch at Liberty grew Muir’s conviction that she could design clothes. In 1955 she married the German actor Harry Leuckert and, after working briefly at Jacqmar, was able to secure a job at Jaeger in 1956, designing for the Young Jaeger label. In the early 60s, the jersey dress manufacturer David Barnes approached Muir, asking her to design for the mass market. She wasn’t interested, but when Barnes offered to support her starting her own label, Muir jumped at the chance, launching Jane & Jane in 1962. Here she coined the phrase, “wholesale couture”, making clothes that youthfully flowed in step with the times by eliminating the lining and some of the seams. She won Dress of the Year in 1964 for a Liberty silk floral printed dress, modest and floaty and all about the fabric – and thus, very sensual, despite (or, perhaps, because of) its length and high neck.

By 1966, Muir had broken entirely free from David Barnes, setting up with her husband Jean Muir Ltd, with a showroom on Mayfair’s Bruton Street. In the very next year, she would design and make Eleanor Bron’s clothes for the film Bedazzled. She would go on to win dress of the year in 1968 and 1979, the first in spotted voile and the second in rayon jersey with a black leather jacket. She first showed her clothes in Paris in the early 70s, winning the title “la nouvelle reine de la robe” – the new queen of dress.

Felicity Green says that Muir’s signature dress “has little or no interruptions on its way down and around the body”. Designing for the confident woman who wanted to feel fantastic in her clothes, Muir continued to make easy flowing dresses out of fabulous soft, pliable fabrics, such as chiffon, cashmere, silk, crepe and jersey, her jackets in suede or soft leather. She had her own fabrics made for her clothes, as well as buttons, hats and buckles.

Though she could do extraordinary things with bold prints, bright oranges and deep yellows, usually her fabrics were solid colours and usually dark. John Knox of Aire Valley Mills remembers that she had them make “the darkest navy we ever produced. . . It turned out to be a bestseller, known in the trade as the ‘new black’.” Muir’s decoration was minimal and functional, such as pin-tucking, top-stitching and rows of buttons. She moulded her fabrics instead of using bust darts, and she placed pockets at hip level to encourage women to hold their shoulders back.

The Woman in Jean Muir

Women who wore Muir knew they would get noticed by the discerning. Muir herself said, “The clothes in themselves do not make a statement. The woman makes a statement and the dress helps.” Artist Paul Prockton likewise said that Jean Muir let “the natural good looks of the woman take possession of the dress.” Fashion historian Jane Mulvagh adds that a Jean Muir dress was “easily forgotten by the wearer but never the beholder.”

The list of elegant, strong women who loved her clothes is impressive: Lady Antonia Fraser, Charlotte Rampling, Judi Dench, Maggie Smith, Dr. Miriam Stoppard, Joan Plowright and, both her house model and muse, Joanna Lumley. No follower of fads herself, Lady Fraser once said, “A number of women who have to define themselves in public by their appearance … turn to Jean Muir’s clothes with ecstasy and relief.” No doubt Lady Fraser had something to do with Muir dressing the film cast of Betrayal (1983), written by her partner Harold Pinter. Muir’s simplicity and flowing elegance has clearly influenced Stella McCartney, who along with Kate Moss remains a fan.

Muir herself famously said, “It ain’t what you wear, it’s the way that you wear it.” At her funeral in a Northumberland church, everyone complied with her wishes and wore black with white flowers. Muir had fundraised for the National Museum of Scotland in her last years, so her husband donated the Muir archive to the museum after her death. It contains over 18,000 objects and 400 finished pieces of clothing, charting Muir’s work from 1966 until 1995. In 2008, the museum held a special exhibition dedicated to Jean Muir’s design, some of which is available to see online. 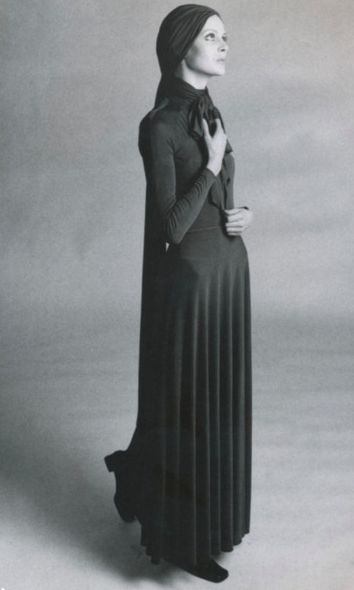 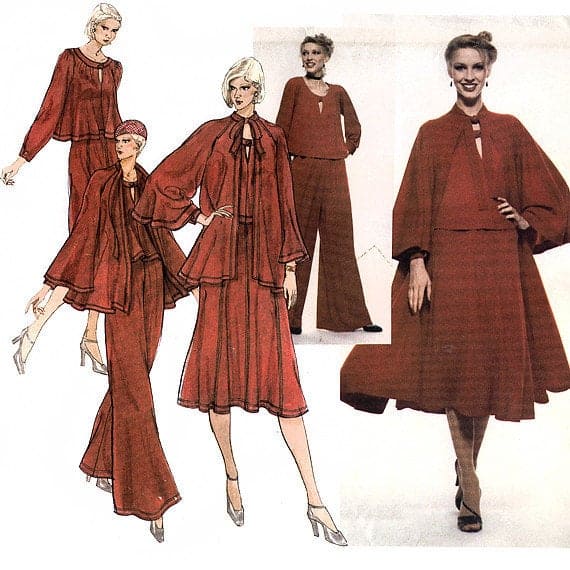 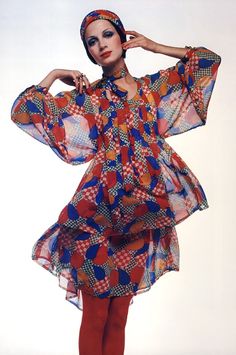 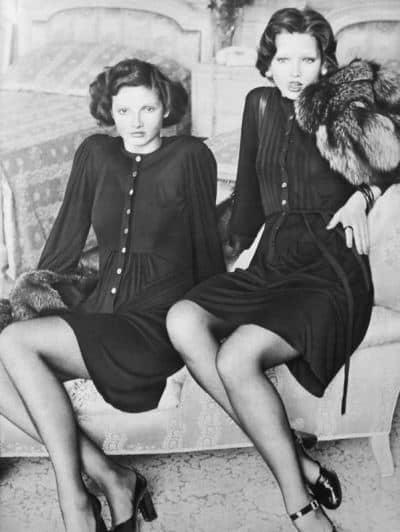 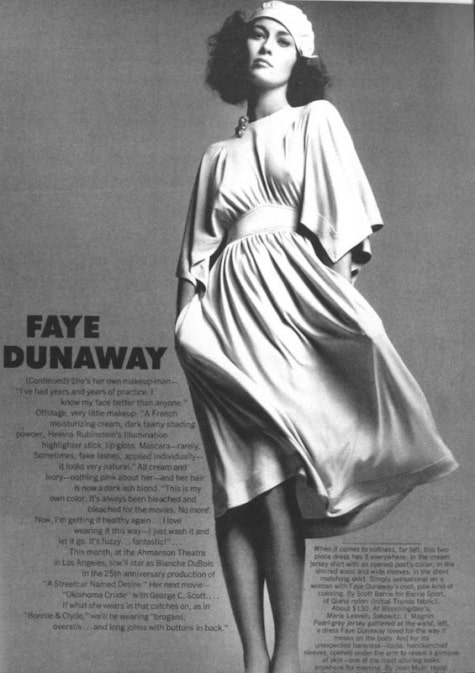 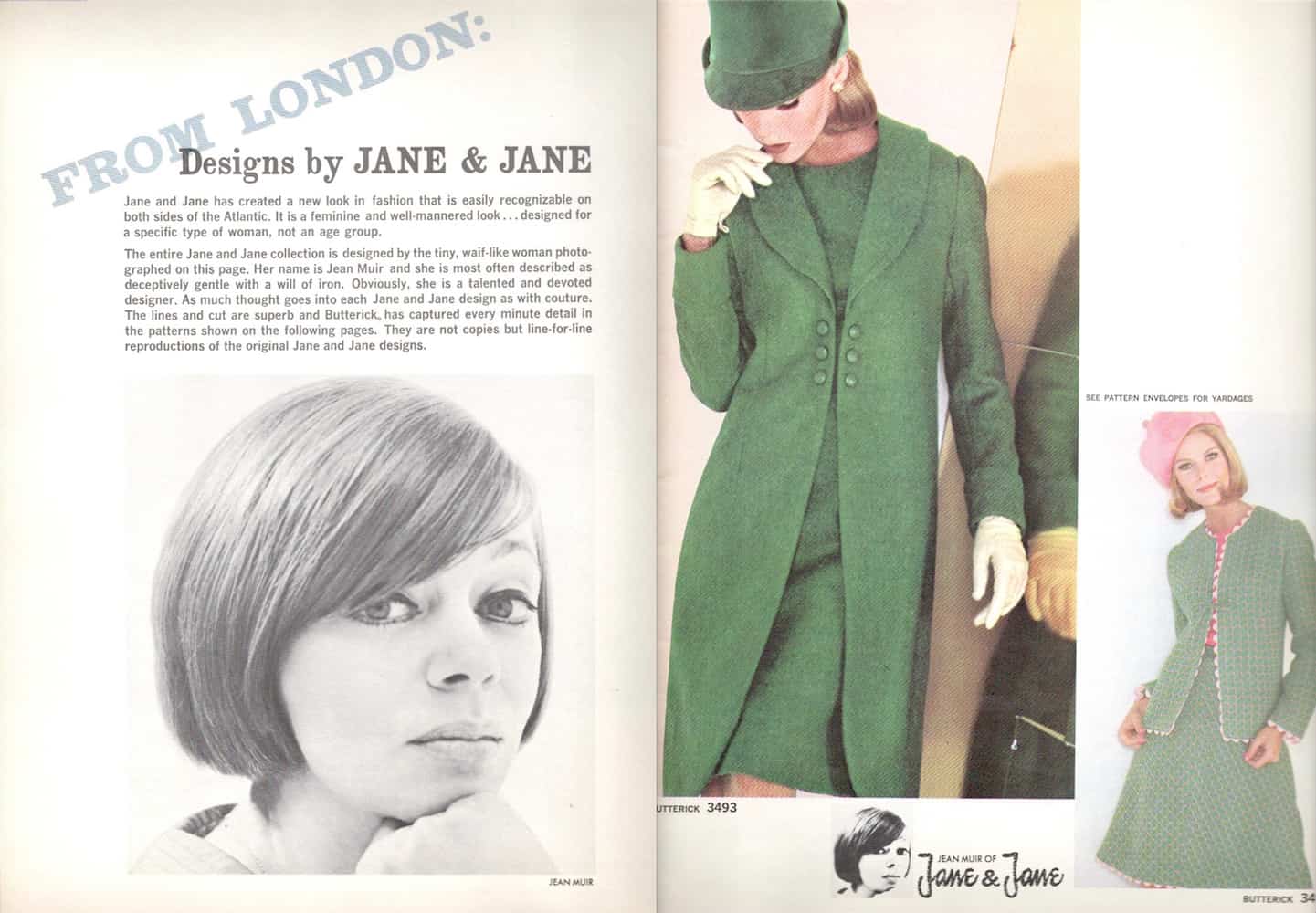 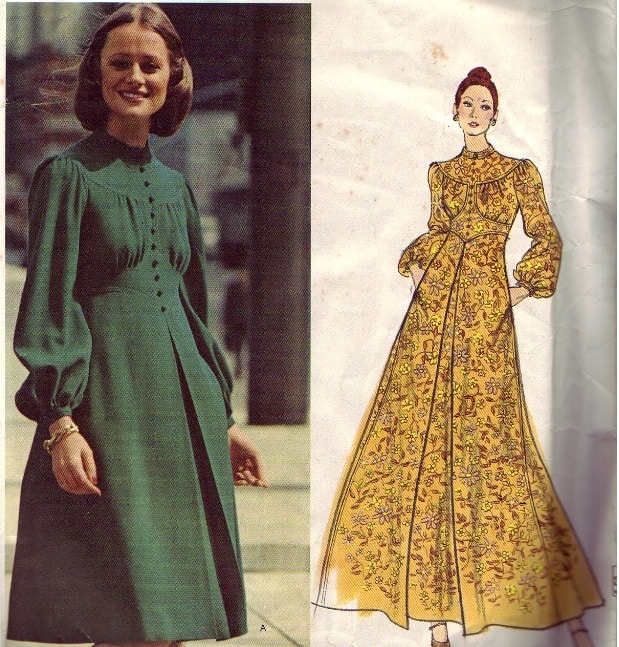 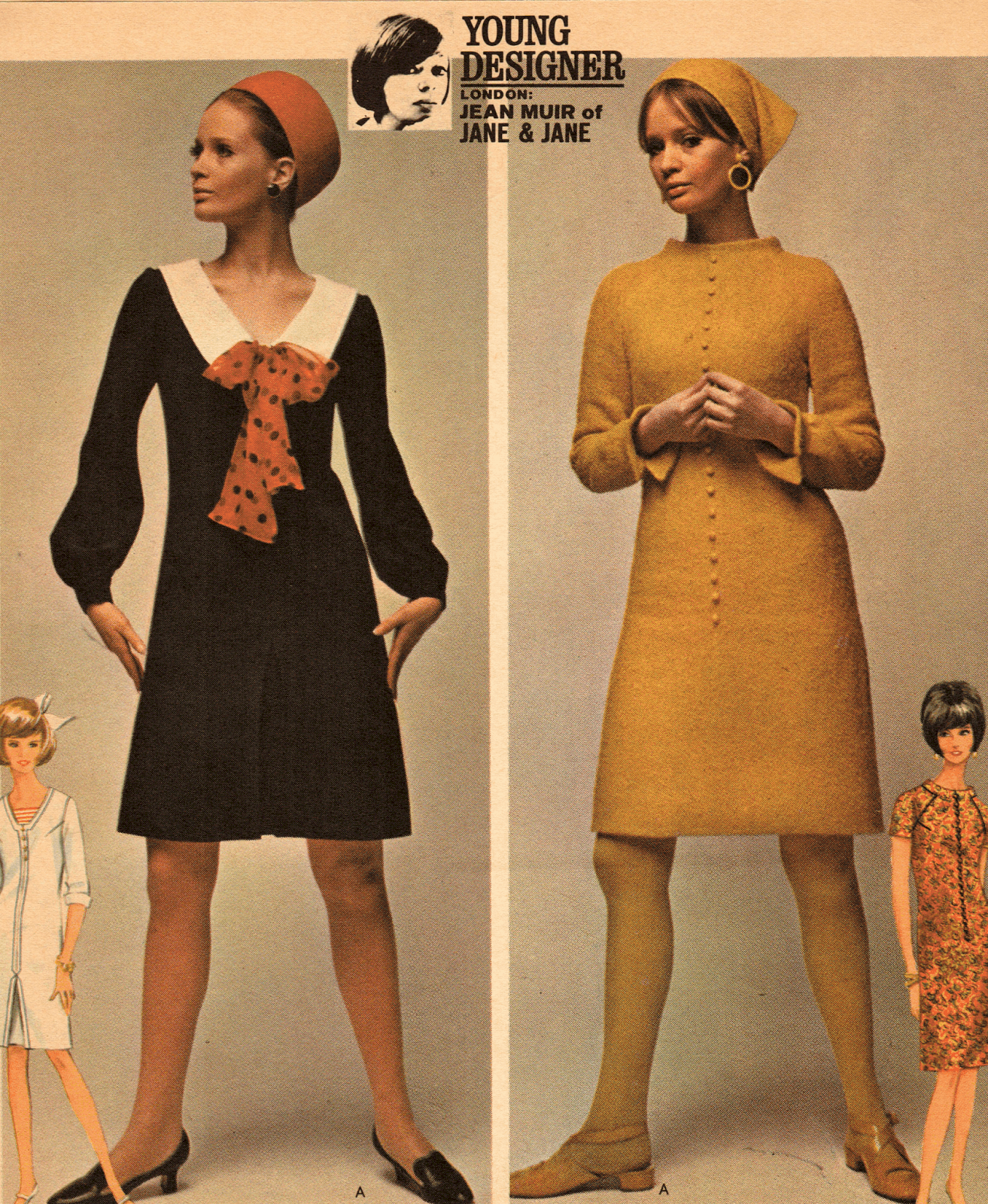 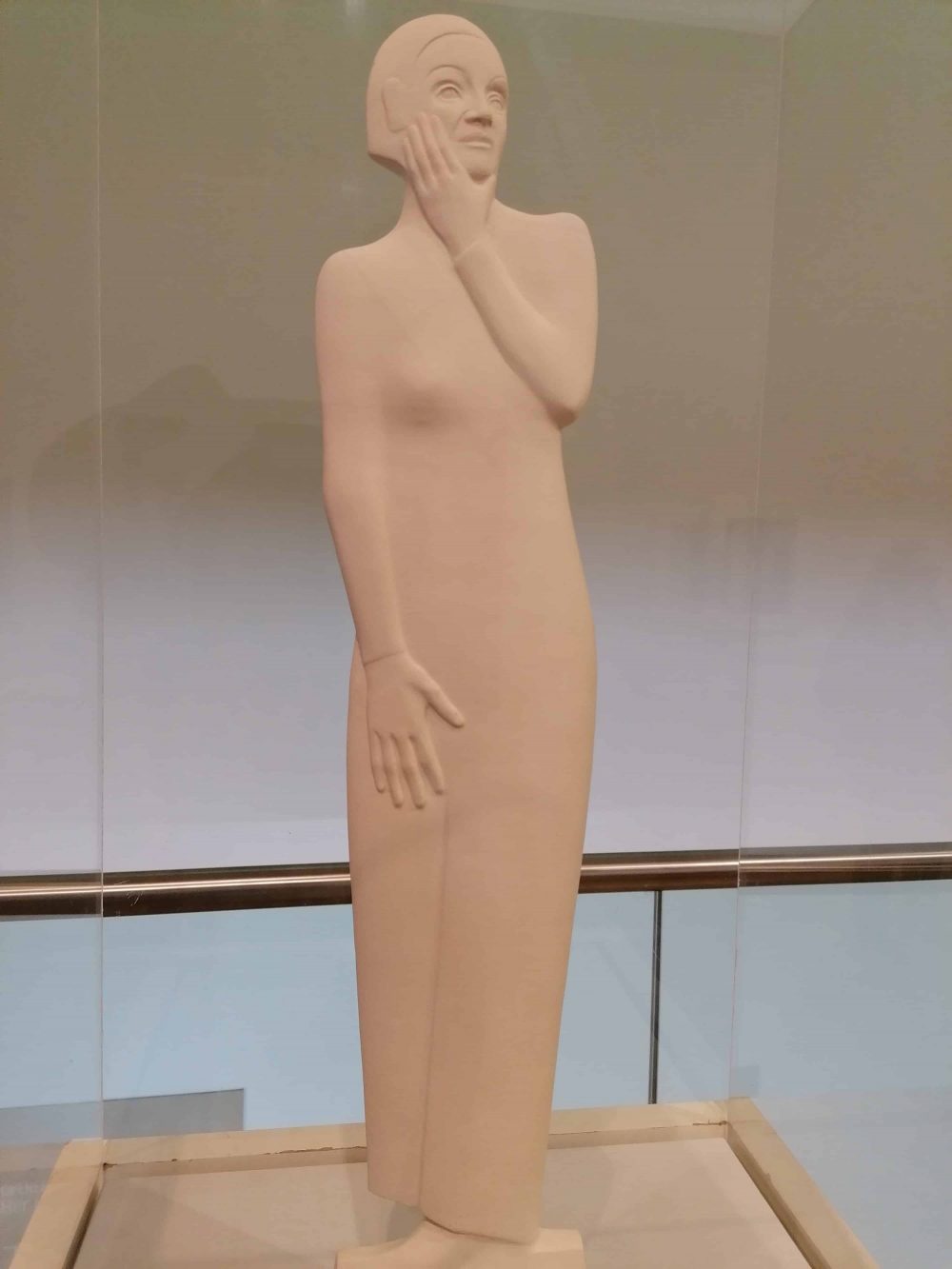 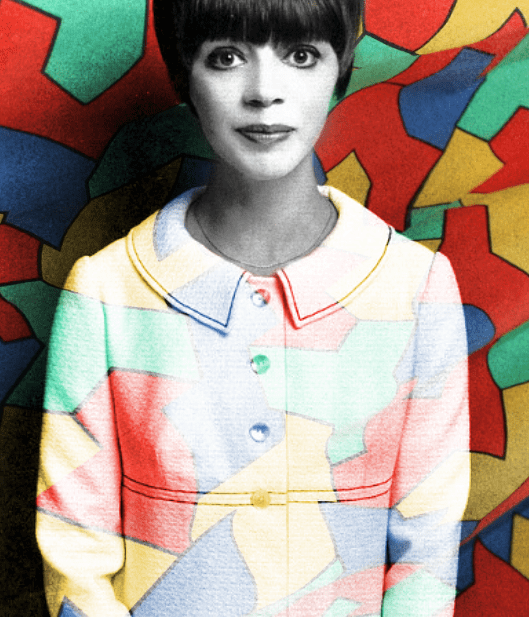